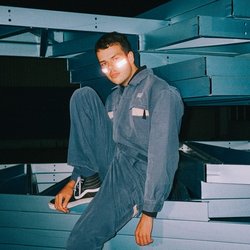 Golden Vessel blends elements of electronic music with hip-hop, RnB and alternative pop, as he continues to explore different songwriting styles and techniques to help create a truly unique sound.

Max Byrne has always seen Golden Vessel as being a collaborative project. He thrives on working with his friends and fellow music industry peers, and as he continues to expand his sound and artistic growth, he is excited about the music that he is yet to create with all of the new friends he makes along the way.

In February 2018 he released a single called ‘Hesitate’ with this good friend and regular collaborator Emerson Leif, which has gone on to be his most successful release to-date with over 7 million streams on Spotify alone.

He also began working on his debut album that is now well underway and scheduled for release in mid-2019. He's already released two of its lead-singles (BIGBRIGHT feat Elkkle, E^ST & DUCKWRTH and MOONSTONE feat Elkkle & Akurei), impressing many and holding true to his collaborative nature.

2019 will also see Golden Vessel embark on his debut US tour supporting BAYNK in February, just ahead of his debut appearance at SXSW in Austin.


‘DIZZY’ is the latest single from Australian artist Golden Vessel featuring the voice of Oscar Key Sung, and is also the next preview of his upcoming debut album.