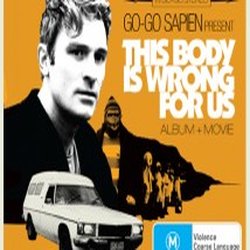 Formed in 2006 as The Great Apes, the band performed extensively in their hometown of Melbourne and released their their independent debut album Merman in 2009 under the new moniker of GO-GO SAPIEN.

Building on the critical and creative success of their debut, the band shared stages with international and local rock luminaries; honing their strange/infectious brand of interstellar boogie on audiences across this great brown land...

In 2011, Go-Go Sapien return to your eardrums (and eyedrums) as bona fide weirdoes with their follow up release, This Body Is Wrong For Us (out in October through Popboomerang Records). The high concept release includes an album length (47 minute) film, drawing influence from the canon of classic sci-fi, schlock-horror B-movies and surrealist art films. Featuring a stellar cast of Melbournian musicians in the character roles – Laura Jean, Kim Salmon, Liz Stringer, Dave Graney (...and many more!)


A psych pop-pocket symphony about the nature of the mind and the inability to control the direction of our thoughts. Expect fuzzed out guitars, hypnotic strings
and catchy "wooo-ooohs"...