Giants Of Science - The Tower Of Toowong 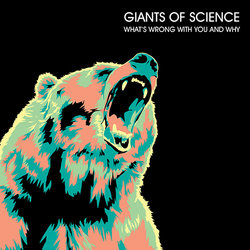 Pure of heart and short of coin but with skills as mad as ever, Brisbane’s vaguely- remembered (by some) sons Giants Of Science have returned and released a new EP, entitled ‘WHAT’S WRONG WITH YOU AND WHY’, the bands first release of new tracks since 2005. This sunny and cheerfully titles offering was expertly recorded by the excellent Darek Mudge at his studio in Albion QLD. the release includes four new songs, one of which has a profanity(fucked)in the tile, which is a bit fun.

Since their last full length release, the totally awesome ’LIVE AT THE TROUBADOUR’, rated by Rolling Stone as one of Australia’s greatest live album ever, healthy drummer and all-round good guy Steve Lynagh has invented a new internet(he calls it “Steve’s Internet), Tuitey has seen High On Fire once and missed them twice, Tanzie has moved closer than ever to deification, and everybody’s old mate Saltz has gotten glasses, they look good.


Taken from the bands latest EP WHAT'S WRONG WITH YOU AND WHY?
get on board before everybody else rediscovers the band