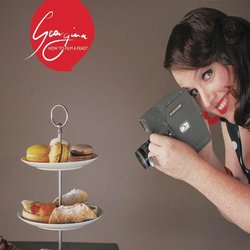 Georgina Pollard is a vocalist, pianist and composer based in Lismore, New South Wales, Australia. She holds dual degrees from Southern Cross University in Lismore – a Bachelor of Contemporary Music and a Bachelor of Business (Accounting).

Georgina’s high school yearbook stated she would eventually be able to “sing your tax return to you” and it would seem this is now a very real possibility!

Currently Georgina is launching her latest EP “HOW TO FILM A FEAST” recorded in November /December 2011 at the Nashua Road Recording Studio. Jim Kelly has played a key role in this project acting as the producer and co-producer, mixing the tracks and providing the final flourishes in the mastering stage.

Georgina's EP covers a broad range of topics including crushes on celebrity chefs, celebrating the love of red wine & chocolate, loneliness, questioning the whereabouts of God, dealing with mental illness and a tribute to a dearly departed loved one.

In January 2012 Georgina toured Japan with “The Tipitina Trio” based in Alstonville, NSW. They performed in Tokyo, Hiroshima, Nara and Osaka at a number of corporate and private functions. She also contributed to their EP “Dee Gee Jay” which sold out in Japan.


"Unreality" is a finalist in the 2012 Musicoz Awards with the winner being announced very soon at the Sydney Opera House. This tune describes how it feels to be in a state of mind not many people have experienced before and fearing you will never return to a "normal" state.

Other tracks by Georgina Pollard: How to Film a Feast  -  Where are you God?
%