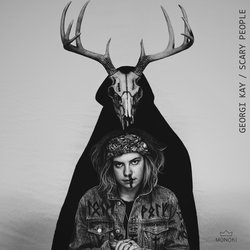 She has won both an ARIA award, multiple APRA awards and received a Grammy nomination. Her voice has featured in numerous DJ sets worldwide by some of music’s biggest names and she has collaborated with international EDM/dance artists including Tiesto, Kaskade, Steve Aoki, David Ghetta, Lipless, M-Phazes and many more.
Along with EDM collaborations, Georgi has also acted in and written for several films and TV series, often offering her voice and original songs as main titles or featured throughout.

Gathering inspiration from old sci-fi and horror films, elements of deep house, 80’s inspired synths and a love for the weird and the macabre - audiences around the world have been seduced by Georgi’s hypnotic and energetic live shows, her brooding, husky vocal tones and her honest, symbolic and often ambiguous songwriting – always leaving them wanting more.