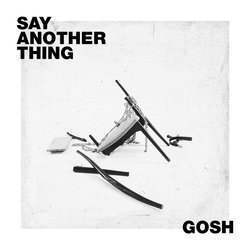 Having formed in 2018, GOSH wasted no time in hitting the ground running. In just one year, the band have released four singles, stirring excitement and garnering attention surrounding the band’s strong emergence. The band have earned airplay from community radio across the country. In 2018 the band took out Triple J Unearthed competition to perform at 2018’s Yours & Owls Festival and have supported Lime Cordiale and The Vanns. Influences have included DMA’s, Catfish and The Bottlemen and Gang of Youths across their material, with GOSH finding common ground in well-written hook and chorus arrangements, while building melodies and swelling instrumentation is also an element of their musicianship that has shone from release to release.


Recorded at The Grove Studios with Jack Nigro (DMA’s, Skegss) and mastered by Steve Smart (DZ Deathrays, City Calm Down), ‘Say Another Thing ‘ proves a fitting sequel to their previous release, ‘Never Lose You’, unveiling a building narrative of an uprising youth. Choruses explode, full of angst and hope from subdued verses, showcasing the band’s flair for dynamics.