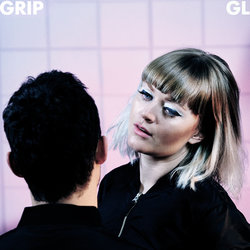 Ella Thompson and Graeme Pogson together make boogie music about heartbreak and love. GL have revealed “Grip” and “Number One” will feature on the their forthcoming debut album ‘Touch’, out later this year on Midnight Feature/Plastic World.

2015 was an exceptional year for GL, who have been making music together since 2014. Besides releasing the glittery tracks “Number One” and “Runner”, the cosmic-funk duo also performed at OutsideIn Festival, Splendour in the Grass and Meredith Music Festival in between launching their single shows and supporting the likes of Chet Faker on his huge Australian tour and Shamir, this month GL will join legendary business men Client Liaison for their World Of Love tour in May.

With their forthcoming debut album out later this year, tune into “Grip” for now to experience the sound of cruise control, dive bars, strobe lights and tape decks with GL.

"”Grip” is about physical love. When something takes its grip, it can feel like a cat and mouse game. You might say all the right things, try and keep your cool but in the end your body does the talking."


Other tracks by GL: Hallucinate
%