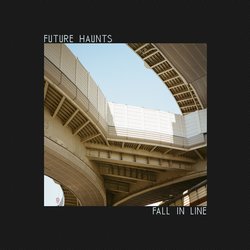 Melding the cosmic studio journeying of The War on Drugs with the melodic immediacy of The Stone Roses, Future Haunts are a group that exist on the blurry edges of rock music. Their songs are malleable; where textured guitar-scapes dissolve into fuzzy freakouts above always driving backbones. Agile melodies are foregrounded, layered, and scaffolded to smart structures that push, but never get lost in their own boundaries.

After the release of their debut extended player ‘Rubicon’ and follow-up single ‘Make Time’ which saw them play End of the Line Festival and support Middle Kids, Future Haunts headed back to the studio, and dug in. They now emerge with a bandolier of fresh material, new single ‘Weather Vane’, and latest ‘Fall In Line’. Self-recorded at Plutonium Studios, before being mixed by Miro Mackie (St. Vincent, Hatchie, DZ Deathrays), these new singles are a natural progression and huge leap forward for the band. An exercise in atmosphere, the dexterous guitar layers swirl under taut melodies grappling with the realities and responsibilities of modern life.


in Ben Speight's words, "'Fall In Line' was written around the time lockout laws were being introduced in Sydney and Brisbane. The song's for all those who work hard to create and nurture a positive culture and to keep pushing on no matter what. The message behind the song is still just as relevant today."