From Oslo - Faking The Benz 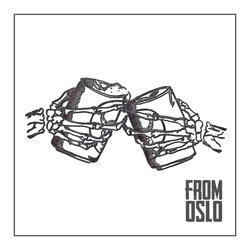 The Melbourne based grunge-punk band and has already scored multiple spins on Triple J on the first single “No Sound” from their self titled EP which was premiered by Dom Alessio on Home & Hosed and received a 4-star review from Richard Kingsmill stating: “They have the hooks to match the power” after he spun “No Sound” on his 2016 show. With sounds likened to DZ Deathrays/Royal Blood the duo play regularly in Melbourne and across Australia building a reputation as a "formidable live band" (Dan Watt, Beat Magazine) having supported the likes of Kingswood, High-Tails and Wolf & Cub. The two piece are not shy of touring, with a 5 date tour in 2015 and a 6 date tour set for June/July of 2016 stopping in Melbourne, Brisbane, Adelaide and Hobart.


Melbourne new comers and punk rock duo From Oslo are today excited to announce the release of their self-titled EP on Friday May 13 via Habit. The EP was recorded in their hometown of Melbourne with up-and-coming producer Jez Giddings (Clowns, Sincerely Grizzly).

Other tracks by From Oslo: No Sound  -  Nobody's Original
%