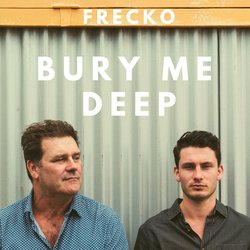 It’s been sometime between drinks for Jack and Jason Freckelton in releasing new music. They have learnt a lot since their debut album Two of Everything in 2016 with regard to playing, writing and the direction of their music.

With the thought of a new album for late 2019 looming, there is also a transition of name from The Grinning Bellhops back to their origins as Frecko, for now they will use both.

“When I was a teenager, I loved going ‘bush’, outback with my older brother, the towns, the places the people, I still go bush, I still have a love for it”.

The current situation that rural Australia finds itself is weighing deeply on many people’s minds. We will never escape the harsh reality of flood and drought in this country but have we gone too far in protecting some whilst leaving others feeling exposed.

Political and thought provoking, Bury Me Deep aims to resonate with all people from suburban dwellers cocooned in their abodes chained to an urban existence to those living it closer to home on or near the land.

Produced by Lachlan Bryan with Damian Cafarella on the desk in Melbourne.


Bury Me Deep aims to raise some thought and consideration to what could be an all too true phenomenon if we cannot get more out of the political process to ease the burden on rural Australia.