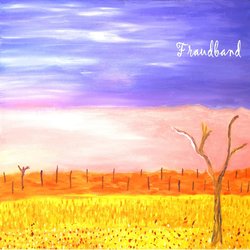 Taken from an I-94 bar review "Who makes the calls in Fraudband is shrouded in mystery as the members like to keep a low profile, and their sound is idiosyncratic and immediate. The band cites Sonic Youth and there are some parallels in song structure, but to these ears they only operate in a vaguely similar de-tuned sonic space. There’s a distinct early Velvets or pre-commercially successful Triffids vibe about the LP songs, recorded live in a basic studio in an afternoon. Throw in a slight Television nuance – especially to the way Don’s drumming makes maximum use of the kit – and some Dirty Three spontaneity and you’ll get the idea.

The Fraudband guitar sound is drier than a footpath in outer-suburban Melbourne in a rain-less February and burns with similar intensity.

Fraudband sound like Television (one of the new songs like "Swells" they play live that would be on an album if only they weren’t so lazy.) Sometimes they are like a film soundtrack. There is also suggestions of improvising that suggests Fraudband could follow the Dirty Three into that critical zone of complete acclaim, should they make it back to Europe one day."


From I-94 Bar review "The rambunctious stormcloud of “Making Things Better By Making Them Worse” is a show of potential should Fraudband scope out a move into film scores. An enthralling live-in-Japan “Losing It” from a recent tour borders on the improvisational and suggests that Fraudband could follow the Dirty Three into that critical zone of complete acclaim"

Other tracks by Fraudband: Better Loosed Up
%