Fraudband - (I've got an) Eastern block 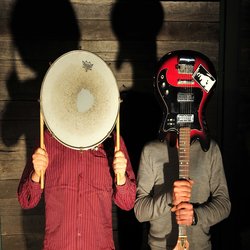 Fraudband began in 2013 when two friends entered the back room of an inner city house with tunes to play.

They began gigging at inner Melbourne and regional Victorian venues including some small festivals.

They developed a sense of their own sound and committed some of this to tape at a community radio studio. In mid-2014, following some compilation appearances, Fraudband released these recordings as their debut, ‘First Songs’ on Kasumuen Records.

Issued on both Cd and cassette, each copy of this release comes in hand cut and individually painted covers, making each copy unique - emphasising the bands tactile and diy approach to music making!

First Songs received some high praise….
“There is something about the all-pervading disparateness of this music that for me makes it so exceptional” (The Sound Barrier)
“A balletic kineticism at work here that underpins it all” (Sonic Masala)
….as well as airplay on Triple R, PBS FM and 3CR radio shows.

A debut video has been produced by renowned UK video artist, Paul Rodgers for the track ‘(I’ve got an) Eastern Block’, from First Songs. This video has featured on the noted tastemaker M+N site as well as on the European ‘Psychgazer’ compilation #46.


Transport your self to a joyous eastern wonderland, hard to believe but its there, in your psyche, if you want to din it. With just guitar and drums, Fraudband will take you there, just close your eyes and lie back!