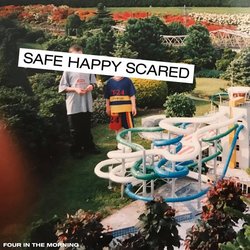 Melbourne alternative folk rock outfit Four in the Morning boast an audacious DIY sound, armed with a catalogue that covers everything from psychopaths, to love, to whether you should kill God.

Everything from jazz, folk and ambient rock comes together to create clever considered music that sounds like it might all fall apart at any minute. Their influences include music legends such as The National, Bruce Springsteen, Elbow, Radiohead, Bonobo, Frightened Rabbit and even Dire Straits.

Since forming they’ve gone from strength to strength, being nominated for an Independent Music Award, selling out The Gasometer, gaining airplay on American college radio and playing gigs all over Melbourne.

For their sophomore EP this year, the band teamed up with producer John Lee (Laura Jean, Martin Frawley, Lost Animals, Beaches) to channel some newfound energy and take their sound further. Working fast, the whole EP was recorded in one very long weekend. Over five songs, it asks whether it’s safe to feel happy in a world that’s falling apart.

Four in the Morning are an unprecedented product of Melbourne’s musical melting pot and are not an act to be missed.


On Command is an unsettling love song that explores mental health and intrusive thoughts, with a touch of humour. It opens with calming piano followed by a restless skittering drumbeat. Intricate layers of sound blossom around Kevin Dolan’s striking voice. The song build and builds until it finally explodes with one hell of a guitar solo.

Other tracks by Four in the Morning: Lie Down  -  Four Years