Four Lions - How Much 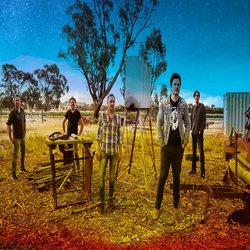 They ply their trade in a potent brand of Americana that fuses roots, rock and alt-country. Think Ryan Adams and the Cardinals, Tom Petty and the Heartbreakers, Bruce Springsteen and the E Street Band, Neil Young and Crazy Horse. It's the classic music of small towns with only a couple of bitumen options whenever you want to get the hell outta Dodge.

Formed in late 2014 by singer/guitarist songwriter Shann Lions, who liked his new band so much that he named himself after them. He is completed by Keith MacQueen (lead guitar/vocals), Stephen Briggs (keyboards, Hammond), Greg Perry (bass), and Gavan Moncrieff (drums, percussion).

Chinese astrology will tell you that 2019 is the year of the pig - but it's really going to be the Year of the (Four) Lion(s).

The band's fourth album, Hard Days, is due to drop in May - and it's a bona fide cracker.


How Much started life as a "rockier-type track with a Replacements' Stink vibe", referring to the (in)famous Minneapolis alt-rockers' 1982 EP.