Foam - Get On Board 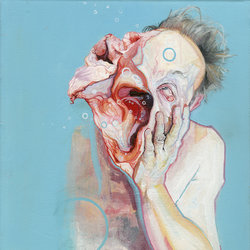 Perth 3 piece Foam display qualities of classic indie rock like Mclusky, Butthole Surfers and The Jesus Lizard and sonically reference legends of Australian rock like The Drones and even The Birthday Party. It’s a furious, ferocious, tireless sonic marriage. A relentless barrage. Booming and at times savage, there’s an undeniable ire in these discordant songs that is utterly magnetic.

Boasting song-titles as puzzling as 'I Could Milk Myself' (which triple j’s Dave Ruby Howe gave a big thumbs up via Unearthed) and 'Eat Your Family', with Coping Mechanisms, all your desires for solid, challenging alternative rock will be satiated. First single 'Get On Board' was premiered via Tone Deaf in September 2016, going on to pummel the airwaves thanks to RTR and 4ZZZ. The Lowdownunder praised it as “a raucous, chunky bit of indy bliss” and “crackingly fun”.

Foam have claimed slots on the WA Big Day Out and Groovin’ the Moo line-ups and a WAMI nomination in the Best Video category. Get around them while they’re still a tightly held state secret. Fresh and genuinely furious. See them on tour soon, making things as loud and jarring as possible.


'Get On Board' is the second single released from Foams debut album Coping Mechanisms.


Other tracks by Foam: When Does It Get Better