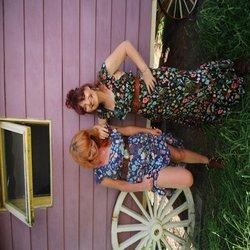 Fly Little Sparrow is collaboration between Lizzie Flynn and Lisa Brennan. They started singing together after meeting at Southern Cross University in Lismore in 1995. Fly Little Sparrow took flight in 2019 at Illawarra Folk Festival and included double bass, violin and percussionis. All contributing to their collection of eclectic, melody driven sometimes quirky and satirical, harmony clothed songs.

Both are artists in their own right Lisa Brennan being apart of Triple J's first unearthed band (along with Grinspoon) Ode to a Goldfish, she has supported acts like The Finn Brothers, Christine Anu, Jeff Lang, Idea of North, just to name a few.

Lizzie Flynn writes songs that blend satire with joyful emotion. She has also written songs for childrens caberat, one which was included in Queensland's Out of the Box festival. She released her fourth cd 'You and the Open Sky' in 2017 which included a successful tour and saw her play The Woodford Planting festival and many others.

The name Fly Little Sparrow is inspired by the Dolly Parton song Little Sparrow, which they often sing together and which also reflects somewhat the style which makes this duo..


Drink Your Wine is a song about the possibility of what could happen under the influence of a beautiful Shiraz. Its also considers the conflict of complete indulgence and enjoyment of drinking such whilst also knowing there may be undesirable desicions made under the influence. Its like a conversation with the devil and angel on one's shoulders.