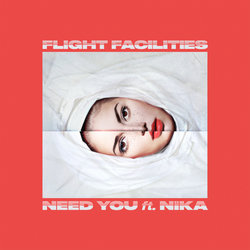 "Need You" follows a tremendous 2017 for the producers, releasing the Hype Machine-topping single “Arty Boy” which has since amassed over 5 million online streams. More recently, their single "Stranded" featuring Broods, Reggie Watts and Saro has served as one of their most compelling pieces of work to date, further cementing their place in the world's electronic scene and propelling them into a league of their own. Outside of the feature artists, the duo also brought together concert pianist Piers Lane, Warpaint drummer Stella Mozgawa & more, while garnering international support from Clash, Earmilk, mixmag and Indie Shuffle.

Since emerging with the timeless global summer anthem “Crave You”, Flight Facilities have held the formula for feel-good soundtracks that make people want to dance. The pair have risen to international fame with cult hits such as “Clair de Lune”, “Down To Earth” and “Sunshine” - each garnering millions of online streams, while their debut LP, Down To Earth hosted an impressive list of guest artists including Kylie Minogue, Emma Louise, Reggie Watts, Owl Eyes, Bishop Nehru, Micky Green and Giselle.


Premiering with triple j’s Gen and Lewis, “Need You” finds the perfect balance of fragile melancholy and determined beat in a seamlessly compiled electronic release. Impeccably polished and fluent as ever, “Need You” is a charming new stride from last year’s highly triumphant and collaborative “Stranded”.