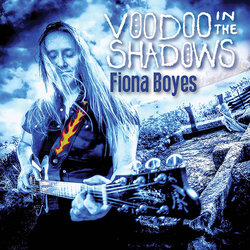 Australia’s First Lady of the Blues, Fiona Boyes, continues her stellar recording career with the release of ‘Voodoo in the Shadows’. Supported by her Australian band members, multi-instrumentalist Tim Neal and percussionist Mark Grunden, she is joined on 4 tracks by award-winning New Orleans artist and Grammy nominee, Johnny Sansone (harmonica & accordion).
Fiona is a 7 time final nominee in the USA Blues Music Awards and this, her 14th release, follows recent award-winning albums, ‘Box & Dice’ and ‘Professin’ the Blues’.
‘Voodoo in the Shadows’ explores the traditional music of Mississippi and Louisiana, from Hill Country and Delta Blues to Louisiana Swamp Pop. The songs tell stories of respect, partying, tough attitudes, mystery, sensuality, and love. Nine of the eleven tracks are originals, inspired by recent experiences such as performing at iconic Red’s Lounge in Clarksdale (‘Party at Red’s) or playing Jessie May Hemphill’s old bullet-riddled guitar (‘Tell Your Story Walking’). From the opening swampy guitar tribute to her mentors (‘Call their Name’), driving cigar-box boogie accompanied by Johnny Sansone’s blistering harmonica (‘What You Put on Me’), Louisiana style accordion (Don’t Leave Your Feet at Home), to the Hammond drenched closing ballad ‘Ember’, it is a diverse musical ride!


A musical tribute to an iconic ‘juke joint’ in Clarksdale, Mississippi, ‘Party at Red’s’ is an invitation to lose your blues and have some fun! The lyrics reflect some of the famous sayings of Red Paden, local character and proprietor of Red’s Lounge. Fiona and the band are joined here by award winning New Orleans musician Johnny Sansone on harmonica.

Other tracks by Fiona Boyes: What You Put on Me  -  Little Things
%