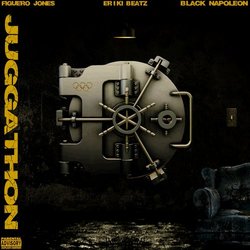 Perth-based rappers Figuero Jones and Black Napoleon have proved to be a menacing force in the modern hip-hop climate of Australia after repeatedly dropping turn-up styled anthems and melodic classics which have captured the attention of the Industry and the public alike.

Accumulating over 330 thousand streams on Spotify alone from their last two singles it is clear that they are a force to be reckoned with. Returning for another collaborative trap single titled ’Juggathon’ set for release on February 1st on Day Ones it’s looking like 2019 will be an even bigger year for the rappers. Figuero Jones recently debuted on Beats One Radio with Ebro Darden following the recent release of his solo single ‘GETONUP’ which has already garnered over 40 thousand streams since its release in November last year.

Neither Figuero Jones or Black Napoleon can be considered conservative when it comes to the amount of work that they produce. From constantly being in the studio, performing live including the recent One day Sundays Block Party in Perth alongside Joyride, ChillinIt, Hyclass & more. With hints at a collab-tape dropping between the duo in the coming months, all eyes are staying glued onto their current movements.


Already massing over 100,000 Spotify streams in the first week, Juggathon has made a huge impression since premiering via Complex earlier in February, landing multiple playlists across Spotify and Apple Music the numbers are set to continue running up and show no speed of showing anytime soon!