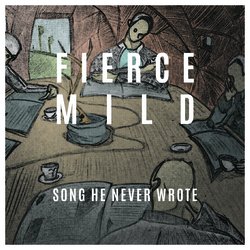 Fierce Mild form compelling songs speaking of all things from the sinister to the absurd. From a brooding, visceral atmosphere reminiscent of that of The Drones but swamped in a cinematic maze that includes elements of shoegaze, post­rock and psychedelic music. The narratives unfurl amidst unrelenting dynamics that transcend listeners into unnerving dreams.

The band has released a triplet of tracks to national acclaim and airplay, with sold out shows and 3 national tours in the past year which included performances at The Brunswick Music

Festival, Backbone’s 2High Festival and Rock the Bay. Their sets are aided by stunning interactive visuals that aid the cinematic nature of their compositions. This led them to headlining the video art and music festival Stargazed in 2015.

“The band isn’t afraid of space – filling it with dark layers of guitar, notes that screech and blend from one to another... the space between differentiates them as performers as opposed to just another live band” (AAA Backstage)

“Waves of sound washed over me, swirling through the space between my ears, giving me goose­bumps. There was the sense of an ever­increasing build, which filled me with the desire for more.” ­ Krystle Richardson (Scenestr)


Song He Never Wrote presents the band’s visceral and dark edge that typifies their distinct sound and captivates audiences at their live shows. It also demonstrates Fierce Mild’s lyrical and conceptual depth. A ticking typewriter echoes through the song as inhibition slowly writes a character out of existence entirely.