Felix The Great - The Zone 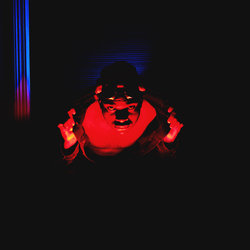 Having previously twice topped the charts in New Zealand where he grew up, the Zimbabwean born artist has quickly announced himself in the bustling Melbourne live music scene, recently being seen guest featuring alongside rising names including Kae The Goat, Droopo and Kobi Spice.

A fiercely independent creative, FELIX is self produced, self engineered and self released through his own label 'WORLDWIDE FLEX ENTERTAINMENT' tackling genres from hip-hop to R&B and dance / electronica.

The vocalist and multi-instrumentalist has previously attracted some attention from outlets abroad in the UK and USA for his undeniable talent and intriguing personality, with 'The Zone' set to have Aussies firmly locked into his movements.


'The Zone' is a step into the brooding mind of FELIX THE GREAT, combining the vulnerability and lush falsetto vocals infamous in the early work of The Weeknd, with dark synths and moody 808's familiar with listeners of Travis Scott or SAINt JHN. Shrieking guitars and fierce tom drums form a brutal backdrop to an ultimately mellow and introspective journey.