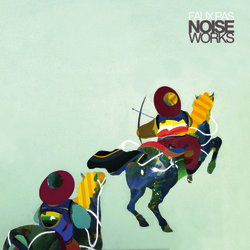 In the four years since his 2006 debut record ‘Entropy begins at home’, Faux Pas has been far from dormant. There have been three EPs, each containing a lead track well supported by community radio and Triple J alike: Changes in 2007, Chasing Waterfalls in 2008, and Silver Line in December 2009. There have also been remixes for Pikelet, Gotye, Paul Dempsey and many more; plus appearances on compilations for institutions as varied as literary journal The Lifted Brow, respected US label Ghostly International, and Ministry Of Sound.
All of which leads to ‘Noiseworks,’ pieced together by Tim in his home studio throughout 2009, and then mixed with the assistance of Melbourne producer Franc Tetaz, well-known for his work with Architecture in Helsinki, Sally Seltmann and Lior.
From the tropical future-funk of Guillotine to the ethereal dream-beat of Vanderbilt, ‘Noiseworks’ is a joyous explosion of digital psychedelia.
The singles Chasing Waterfalls and Silver Line benefit from generous re-workings. And while the record is grand in its technique and architecture, an intensity of emotion is never far from the surface.


Faux Pas seers with a cosmic infused piece of undeniable electronic pop which is less subtle than sublime.