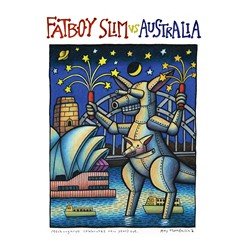 In 2006 Littlemore co-founded the band Tonite Only. Ministry of Sound licensed their two debut songs "Danger (The Bomb)" and "Where the Party's At" internationally.

2007 saw Littlemore re-establish his solo career as Sam La More touring around Australia, New Zealand, Japan, Europe and North America. Littlemore then moved his focus to finishing singles for other artists including Peking Duk, Parachute Youth, The Potbelleez among others.

In 2016, Littlemore officially joined Pnau. "Chameleon", their first single as a trio, peaked at number four on the ARIA Singles Chart and reached triple platinum sales in Australia. "Chameleon" was nominated for the Apple Music Song of the Year and won the Best Dance Release at the 2017 ARIA Awards.


Alongside Northlane and The Kite String Tangle, the release features tracks from Set Mo, The Aston Shuffle, Sam La More (of Pnau), Carmada and LO’99 all bringing a unique take on the biggest Fatboy Slim tracks, tackling celebrated hits like ‘Rockafella Skank’, ‘Weapon of Choice’ and ‘Right Here, Right Now’.