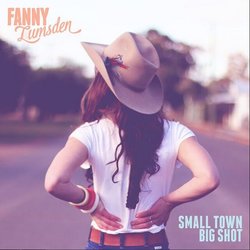 Fanny Lumsden is ‘a breath of fresh country air’ according to Rolling Stone Magazine and has been coined ‘Australia’s answer to Americana’ by Rhythms Magazine.

Her debut record Small Town Big Shot came in at #6 on the Country ARIA Chart, #15 on the AIR Chart and has gained critical acclaim all over, it’s no wonder ‘I love Fanny’ are the words on everyone’s lips. With the first two singles from the album, Soapbox and Land of Gold both reaching #1 on the Country Music Channel, a nomination for CMC New OZ Artist of the Year, a sold out Country Halls Tour and raving 4 star reviews, the Western NSW raised Fanny Lumsden has been hailed by The Australian as; ‘a rising singer songwriter turning heads’.

This year has seen Fanny play shows from from Tasmania to Broome and back again as well as her 5th Annual Country Halls Tour which is currently touring regional NSW, QLD and VIC.

Fanny is, as Chris Familton put it, ‘a born entertainer with a voice that swings between pop, soul and country' and by surrounding herself with fine musicians (The Thrillseekers) she’s never failed to leave an imprint on an audience.


Soapbox is built on that old cliche of 'don't judge a (wo)man until you have walked a mile in his/her shoes. Don't comment where have no business or on someone who is making a go of it. If you couldn't say it to their face..maybe don't say it at all.

Other tracks by Fanny Lumsden: Land of Gold  -  Bravest of Hearts