Family Jordan - It Won't Be Long 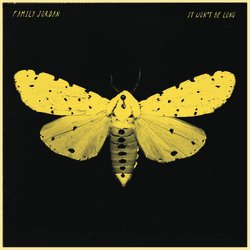 Brisbane seven piece Family Jordan are here for a new set of ears. New in the way you feel when the last mosquito has been squashed. New like a toothbrush. Family Jordan cut the grease and wash the dishes all under the beautiful umbrella of rock and roll. Over the past year Family Jordan have been busy playing in and around Brisbane, appearing at the King Gizzard curated Gizzfest, and supporting the likes of Wagons, Little Bastard, The Belligerents and The Babe Rainbow. Conceived on the beach and born on the couch of every person who ever wanted to start a band. Bound in defiance of soullessness and rigidity. Family Jordan have used their two years of life to refine a mood. A mood somewhere between a burn out in the middle of the night and a flock of 'raised in captivity' geese being set free at last. Sown in the quilt of traditional song writing and lyricism, Family Jordan have now exposed their style. A strong, sprawling, powerful and free sound, destined to fill the void between the singer songwriter and the vivid landscape of modern music.


A brand new single, the first to be taken from the bands forthcoming sophomore album, due early 2016. The single is titled ‘It Won’t Be Long’ and was recorded and mixed at 'The Shed' studios in Brisbane by the bands guitarist Sam Joseph who also co-produced alongside Jordan Rochfort.