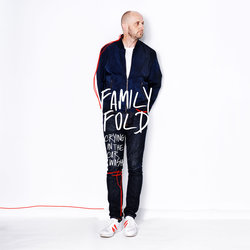 • Paul Andrews was a founding member and chief singer/songwriter in Sydney band Lazy Susan.
• During the band’s 14-year history (Lazy Susan breaking up in early 2012), Paul was the driving force behind its four albums, six EPs, and countless interstate tours and local shows, as a headliner and with national and international touring acts (eg: Brian Wilson).
• Paul embarked on his Family Fold project by recording the 11-track album, Lustre Glo, in 2015. The album further confirmed Paul as one of Australia’s best ‘under the radar’ songwriters and received glowing reviews in Rolling Stone, the SMH, themusic.com.au
• Two songs from Lustre Glo were added to rotation on Australian radio: Get a Grip Upon Yourself and I’m the One (Who’ll Never Leave You)
• In early 2017, thinking about his next project, Paul was put in touch with Nashville-based, Brad Jones
• Brad Jones has an international reputation as a producer/engineer having recorded artists and bands straddling Americana (John Prine, Steve Earle), singer-songwriter (Josh Rouse, Bob Evans, Missy Higgins) and guitar pop (Cotton Mather, Imperial Drag, Matthew Sweet).
• The finished product – Family Fold’s second album, Ashfield Skyline – will be released in August 2018 and is Paul’s most assured effort to date


Crying In The Car Wash is the first single from Family Fold's forthcoming second album 'Ashfield Skyline' which is due for an August 2018 release. Produced in Nashville by Brad Jones (Josh Rouse, Steve Earle), it's a beautiful but sad acoustic song that builds to lush strings.