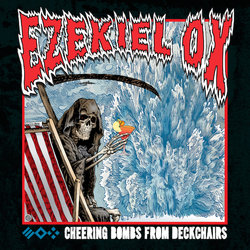 Mammal front man Ezekiel Ox has announced the release of an all new Solo EP 'Cheering Bombs From Deckchairs’ through Muscle Mothership Productions, available on all digital platforms Monday April 15.

The first single to be lifted from the upcoming EP is the killer track ‘Megalomania'.

‘Cheering Bombs From Deckchairs’ is only the second EP release under Ox’s solo banner, but the 23rd studio release the singer has appeared on over a lasting career as one of the most captivating front men in rock n roll. Approaching 20 years since his first release, Ox has spent the past 2 decades releasing music and touring with rock acts such as Mammal, Superheist, The Nerve, Full Scale and many more.

Working again with Producer and collaborator Steven Smith of Terracotta Pigeons, this latest body of work is reminiscent of 90’s era Alternative Rock, with touches of Funk and a little bit of Punk mixed in.

The Ezekiel Ox ‘Cheering Bombs From Deckchairs’ tour for May / June has also been announced - see below for dates and venues. Tickets for all shows are on sale now.


'Bear Trap' is the second single to be lifted from the new EP from Ezekiel Ox ''Cheering Bombs From Deckchairs’.

Other tracks by Ezekiel Ox: Megalomania
%