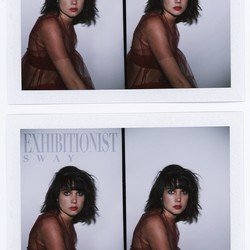 She today turns her attention to new single 'Sway', a track produced by frequent collaborator Jono Boulet and co-written by Melbourne-based LUCIANBLOMKAMP - who has recently worked with grammy-nominated rapper 6LACK. Of the track, Tickle says '‘Sway’ is about feeling tangled up in someone, and wanting to fold into them completely, while futilely trying to guard your heart in the process. I wrote it in Melbourne over two days about a man I adore who has this beautiful, bright personality that sometimes makes my own flaws feel very exposed. It’s a personal reminder to be open to love, and to stop pushing against it even when things feel a bit unsteady.'

The single comes alongside news of Exhibitionist's debut EP, which features the previously released singles 'Motionless' and 'Hands'. The body of work is due out in June through Future Classic.


'Sway' ebbs and flows throughout, drifting in slowly before erupting in a blast of Exhibitionist's hypnotic vocals alongside thudding percussion. It's a unique track that highlights her pop-sensibilities as well as her interest in working outside the square.