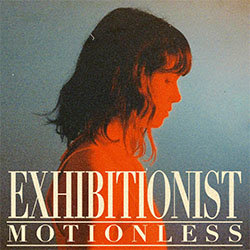 Exhibitionist is the new project from Sydney-based artist Kirsty Tickle. As one half of noise act Party Dozen, the multi-instrumentalist performs behind an incendiary wall of sound, whereas Exhibitionist is the antidote. First single ‘Hands’ radiated vulnerability and a cold elegance. Woodwinds feint subtly between rolling drums, while vocals float above hazy synths.

Six months after Exhibitionist‘s stellar introduction, ‘Motionless’ falls only on yearning ears as it exhibits subtle deviations in the sentiments and tones previously seen in ‘Hands’. The inspiration behind this new offering was galvanised by a poignant encounter with a friend, Kirsty explains:

“It’s my favourite song I’ve written since starting the Exhibitionist project. It was written following a disagreement with a very dear friend. I had done or said something hurtful, and he just froze mid-argument, completely motionless. The lyrics are about finding forgiveness and the cyclic nature of friendships, but mostly the song is about love always coming out on top.”

Raised in Toowoomba QLD, Tickle started performing in Brisbane as a member of Little Scout. Her versatility as a singer and multi-instrumentalist has seen her grace stages locally and abroad as a touring member for The John Steel singers, Henry Wagons and Parades.


‘Motionless’ opens with crisp and garish beats that engender a minimalistic temperament, fortified by delicate vocals and resounding plucked strings. Hazy synths soon glide into an invigorating chorus bolstered with swelling strings and additional vocal harmonies, whilst an imperceptible syncopation embosses the track and progressively expands through flourishing woodwind harmonies.