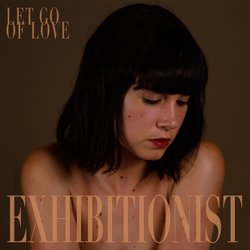 Let Go of Love, the debut EP from multi-instrumentalist Exhibitionist (aka Kirsty Tickle), is nothing short of an exceptional, elegant pop record. Written during and after the breakdown of a long-term relationship, the EP explores heartache and unease and through honest lyricism, intricate instrumentation and Tickle’s delicate, honey vocals that recall R’n’B star Kelela. But the EP is certainly isn’t your standard break-up record, with Tickle also thoughtfully diving into the murky, confusing landscape of navigating selfhood during a moment of change.

Tickle has been playing music since forever, first learning piano as a kid, and then moving on to woodwind instruments during high school. At 18, she begun playing in a band with her sister, the indie-pop group Little Scout. The experience was formative, and since then, Tickle has played in countless bands across Australia - including The John Steel Singers, Henry Wagons and Parades. More recently, she’s been one half of experimental noise duo Party Dozen, alongside long-time collaborator Jonathan Boulet, who also engineered and co-produced songs on Let Go of Love.

Exhibitionist is Tickle’s first solo project. She plays almost every instrument on the EP - including flute, saxophone, clarinet, strings, piano and synth.


It's about when people, mostly men feel threatened by Tickle’s ambition, and was written after someone told her she’d be alone forever if she didn’t find a way to prioritize her relationships over her music. “It’s supposed to be fairly tongue-in-cheek, a middle finger to anyone who feels they have the authority to weigh in on someone’s ambitions”