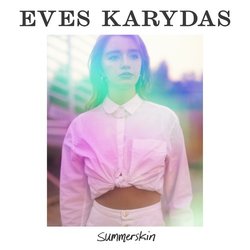 Arriving in London at 20-years-old, having moved halfway across the world from Brisbane on her own, Eves pushed herself into unfamiliar relationships and environments, which brought a remarkable maturity and sensuality to her effervescent pop music. Her time in London since 2015 has seen Karydas craft over 50 songs, the cream of which have been skimmed for her forthcoming debut album, summerskin which is set for release on September 28 via Dew Process / Universal Music Australia.

‘Damn Loyal’ is now set to follow in the footstep of the previous hit singles to drop from summerskin – ‘Couch,’ ‘Further Than The Planes Fly’ and ‘There For You’ – with an equally sharp hook, a mix swooning with layers of reverb (giving it a cavernous feel), and a bouncing beat that stirs it all together to create a steamy, effervescent pop sensation.


The slinky ‘Damn Loyal’ is equally voyeuristic, and features one of summerskin’s best lyrics: “His coat falls off his shoulder like a landslide,” Hannah observes, capturing how something miniature can seem momentous in the throes of obsession.