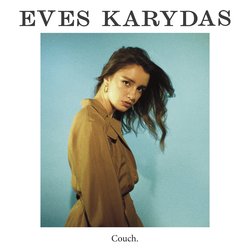 ‘Couch’ features plenty of bounce and sway, and builds upon the sensual and emotional moments of earlier singles ‘There For You,’ and ‘Further Than The Planes Fly,’ but possesses a whole lot more swagger.

It’s another step into the realm of pure pop from the former Brisbane indie-act, which displays a sensuality and effervescent energy we hadn’t seen from her before, and this new direction quickly found a following, the songs climbing over 4.7 million streams worldwide in no time at all.

This current run of hits has been inspired by Eves recent relocation to London, which has seen her push herself into unfamiliar relationships and environments, which she credits for helping her mature as a person, as well as discover a new-found sense-of-self in her music. ‘Couch’ is an excellent portrayal of that development, with its sophisticated songwriting and dreamy, playful pop sensibilities.