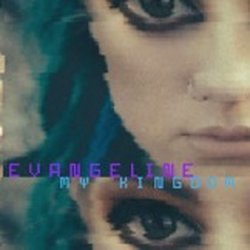 Evangeline attracted some heat earlier this year when she launched her dark, moody debut single, Chemicvl, landing her at the top of the pop charts on Triple J’s Unearthed, where she received rotation airplay and Featured Artist status.

And now, she turns it up a few notches with her follow up release, “My Kingdom” – a vibrant, acidic, synth pop jam, maintaining her signature dark flavour and showcasing her exquisite ethereal vocal style.

The instantly catchy “My Kingdom”, was co-written by Evangeline with renowned producer and songwriter, Jan Skubiszewski, who also produced the track.

For her debut, a slew of positive reviews via online tastemakers such as Hhhhappy, Tone Deaf, and cargoART gave every indication that Evangeline is well and truly on track for a flourishing career, reinforced by the dozens of studio collaboration and gig offers that regularly come her way.

“My Kingdom” - released digitally on September 25, 2015 on Razor Recordings.