Evan & The Brave - Stay This Way 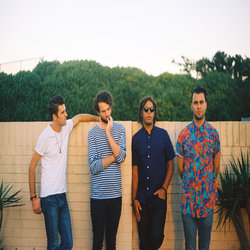 Evan & The Brave might not yet be a name that rings familiar, but they’ve quickly garnered some formative attention largely thanks to their five-part harmonies and folksy cheek. This was first delivered on debut single ‘Lil Monster’, a song that surprised the band with an overwhelming amount of initial attention.
Lead singer Daniel Misfud initially called the band Daniel & The Brave, however quickly abandoned the name after discovering some like-minded Americans had beat him to the punch.A swift turn of fate, revealed to Mifsud that his grandfather, Evangelou Bravos, from who he received his middle name – Evan – actually translated to Evangelou The Brave. The discovery seemed serendipitous, so Evan & The Brave they became.

In late 2012, the band was joined by Lanterns’ guitarist Ross James and the lineup was complete, lending Daniel and the band an anchoring emotional focus for a forthcoming EP release. The sound has progressed, paying homages to the likes of Split Enz while sprinkling Spectre-inspired deliberateness to texture and retaining its honesty, living happily somewhere in the spectrum between brooding Springsteenian introspection and the likes of Blur’s urgent commentary.


Their brand new single, "Stay This Way" is a slice of dream rock-pop that is simply laden with hooks and what can only be called the most perfect of introductions to what comes next.