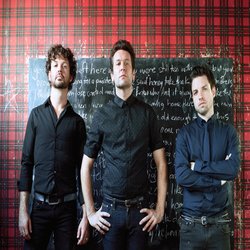 Through the early EP's, Sweater and the self-titled Eskimo Joe, featuring "Turn Up Your Stereo", they endeared themselves to kids country-wide. The EPs were closely followed by their debut album, Girl, featuring beautiful indie ballad, "Liar", and singles, "Who Sold Her Out" and "Wake Up". Using striking visuals with cutting edge video clips and artwork, the band impressed the public and critics alike with a gold selling collection. Their experiences as a band progressed them musically into their second full-length album, A Song Is A City, produced by Paul McKercher and the band. The single "From the Sea" launched them to a massive double-platinum selling success and a spoke of what was to come.

2006's Black Fingernails, Red Wine, was the culmination of all their previous works in a cohesive and pounding shot of dark rock that hit straight at the heart of Australians.

Inshalla, the bands previous musically diverse and internationally flavoured fourth offering delivered a Led Zeppelin tinged, middle eastern flavoured single in "Foreign Land", which earned the band the most played Australian song on radio in 2009, along with an APRA award for "Best Rock Song".


EJ explore what is like being in a band.
“This is a song where I was thinking about how I feel abut Eskimo Joe, but the overall thing – being in the music industry, being in a band and being bullied to give everything of yourself away to everybody.

Other tracks by Eskimo Joe: When We Were Kids  -  Sky's On Fire
%