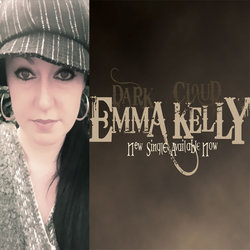 Emma Kelly is an independent Australian Singer/Songwriter who pours her every heart's emotion into her music and you'll feel it. Flightsafe Music describes Em's Song 'Sunny Day' ...'like waves on the shore...your performance brought me right to my heart. Beautiful.' Quicklaunch Song Competition also commented that Em's lyrics are 'Insightful, passionate and heartfelt. Nothing else to say here. Just fabulous'
Songstress Emma Kelly released her debut independent album ‘Ladybug’ in 2010 which was;

Ladybug earned Em a runner’s up in Gary Allen (Charlie Daniels Band) prestigious Best Song in the World Comp and a finalist in the 2011 Toyota Star Maker Competition...
to name a few...
Gary Allen went on to say, Em’s Songwriting is earthed in wisdom, while her voice branches off ..
‘channelling Stevie Nicks or Sheryl Crowe…hitting the high notes Robert Plant would struggle to reach….’

Right now, it’s all about the music to come. Dark Cloud is the title track off the upcoming EP and was released to Itunes in July 2012. Dark Cloud is a harrowing tale and sounds a lot like Stevie Nicks taking an afternoon ride with the Sons of Anarchy.


Emma Kelly's new single 'Dark Cloud' is a little like Stevie Nicks taking an afternoon ride with the Sons of Anarchy.

Other tracks by Emma Kelly: Cleopatra
%