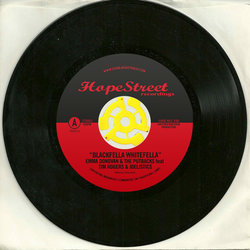 This October Emma Donovan & The PutBacks have brought together some very special guests to release a new 7” single featuring two classic Aboriginal Australian songs. Emma is joined by Tim Rogers of You Am I and rapper Joelistics on a version of Warumpi Band’s 1985 anthem Blackfella Whitefella and by Archie Roach on a deep soul rendition of his late partner, Ruby Hunter’s, heartbreaking hit, Down City Streets.

Earlier this year SOS Blak Australia issued a worldwide call to action to stop these closures occurring. In response to this, Emma and all the artists involved have come together to declare that they stand with the Indigenous people of Australia in support of their right to self-determination on their traditional lands. All involved have donated their time free of charge and all proceeds from the record go to SOS Blak Australia.


Blackfella Whitefella, the country rock epic written by George Rrurrambu and Neil Murray in 1985, feels more relevant than ever 30 years on. 2015 is, in so many ways, becoming a critical year in relations between Aboriginal Australia and the broader community.

Other tracks by Emma Donovan & The PutBacks: Down City Streets
%