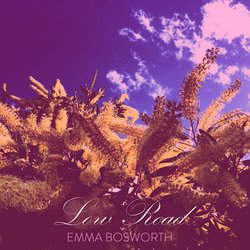 If there is one trait all great artists share, it’s a sense of restlessness. It is a constant hard-wired drive to continually take their music in new directions – testing the waters, finding new sounds, creating music in new ways. And it is something that has always been at the heart of Emma Bosworth’s music.

In the last twelve months, Emma has released four songs, been nominated for awards, written a song for ABC’s Compass and had a baby! A powerhouse songwriter, environment activist and mother. Low Road captures the nostalgic Brisbane sound that she’s becoming well known for, and hints on Lana Del Ray vibes if Chrissie Hynde was her mentor. The song was nominated for song of the year at the recent Australian Roots Music Awards.


“The song is a reflection of people not minding their own business. It’s also a gift to myself, that despite a pretty hard struggle, I’ve been immensely rewarded for sticking to my guns”. Something Emma says is a memento not only of this song and its particular moment in time; but of her life in general.