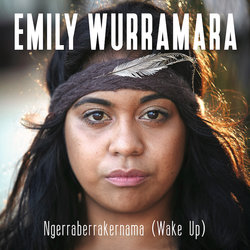 Including writing & performing with Powderfinger front man Bernard Fanning as part of the 2014 QPAC Clancestry program and being celebrated as an 2015 AMP Tomorrow Maker, when young and emerging national treasure Emily Wurramara (phonetically - woorah-murrah) tears up the Queensland Music Awards this March, both as a performer and a 2 x nominee, it will be off the back of a massive 2 years.

Having performed at a multitude of festivals both internationally (Sweden, France and Croatia) as well as locally, including Woodford Folk Fest, Clancestry, Stylin Up and NAIDOC, Emily has supported the likes of Shellie Morris, Troy Cassar Daley, Imposssible Odds and more.


Singing in English and Anindilyakwa (phonetically - annen-dilly-yark-wah), the traditional language of her home Groote Eylandt in the Northern Territory, playing guitar, keyboard and ukulele Emily is both a prolific song-writer and multi-instrumentalist. ‘Ngerraberrakernama (Wake Up)’ means ‘shining star’, and was written especially for Clancestry to sing with Bernard Fanning.