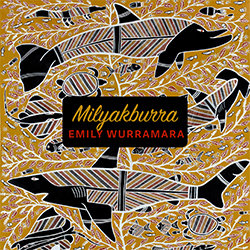 In 2016 Groote Eylandt via Brisbane singer-songwriter Emily Wurramara released her debut EP Black Smoke. Stories from her heart and childhood sung in both English and her traditional language Anindilyakwa, the EP stunned listeners across the country and saw Emily tour nationally and internationally. Black Smoke amassed over 1 million Spotify streams, 54K YouTube views, rotation on Triple J and ABC Local x 2, 10 weeks in the AMRAP charts, a Queensland Music Award, a publishing contract with Mushroom and live showcase slots everywhere from BIGSOUND as a Triple J Unearthed feature artist to Folk Alliance International in the USA.

Now, only two years on - with a child of her own and a world of wisdom at her feet, Emily Wurramara has officially announced the long-awaited release of her debut album ‘Milyakburra’.

Out June 1 and steeped in the sand, salt and concrete of her family, community, culture, islands and all of the souls that have played a part in her journey so far, Milyakburra is 11 tracks again sung in both English and Anindilyakwa that explore the contrasting themes of the two worlds in which Emily grew up - the island and the city. Phonetic Spelling (mil-yhuk- boorrah)


Lady Blue is what my Grandmother called the sea. The sea is majestic, graceful, mysterious and so alluring. It takes me back to spending time with my family on Groote and Bickerton camping and fishing and diving into the sea. I was thinking 'ancient mermaid' when I wrote Lady Blue.