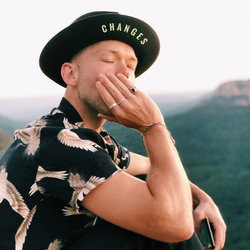 Justin Hunter, better known by his stage name Em Flach, is an Australian musician, producer and photographer. While studying Classical Piano at the Conservatorium of Music, he began writing songs in a small cafe in his hometown of Katoomba. His first major hit was "Your Love" with DJ Kid Kenobi, garnering millions of plays online and reaching Number 7 on the ARIA club charts. Em Flach has played keys for Ta-Ku and collaborated with some of Australia's strongest vocalists, such as Jace XL.

This is Em Flach's sophomore single release from his forthcoming debut EP, #LDKS. The name Em Flach was inspired by his grandmother from the Netherlands, where at the time, she supported her husband working for the Dutch Resistance against the Nazi Regime.

After garnering over one-hundred-thousand streams on the track "Day Drift" with fellow Blue Mountains artists Finbar and Kearna, Em Flach has reflected on his family, past and present, with some of his most personal work coming from his travels around the world.


While gallivanting across Europe, Justin Hunter (aka Em Flach) met Swedish artist Marco DeLeaf while he was in the midst of writing an emotional song about the passing of his sister. Feeling compelled to offer his help, Em Flach and fellow Blue Mountains artist Finbar took over the production and together they came up with the reggae-inspired "Changes."