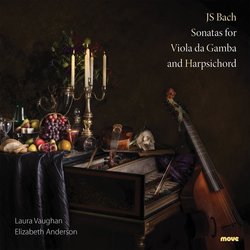 In 1996, Elizabeth Anderson gave her tenth European concert tour, playing solo recitals and four-hands organ concerts with husband, Douglas Lawrence. She received standing ovations for a popular programme at the Brandenburg Cathedral as well as in Hamburg.
It was in the same year that her CD, of Bach's monumental Goldberg Variations received critical acclaim in the Australian press. Numerous orchestral engagements followed, including 28 concerto performances with the Adelaide Symphony Orchestra, the Queensland Philharmonic, the State Orchestra of Victoria and the Australian Opera and Ballet Orchestra.
This series of concertos added to Anderson's already considerable experience playing continuo and concertos with the Australian Chamber Orchestra and with historical instrument ensembles, such as the Australian Baroque Ensemble, the Festival Orchestra (MIFOH) and the Elysium Ensemble.
As well as maintaining a busy performing schedule, Elizabeth Anderson enjoys teaching and is on the staff at several institutions including the University of Melbourne and the Victorian College of the Arts.


Considering the fame of Bach’s solo violin partitas and his solo cello suites, it is remarkable how his sonatas for viola da gamba and keyboard remain in the shadows, at best, of most music-lovers’ consciousness. Here they are performed sweetly and masterfully in Harpsichord and Viola de Gamba.