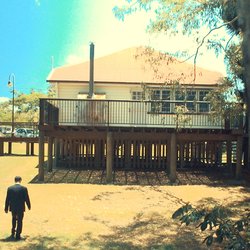 Songwriting and storytelling lie at the core of Brisbane-based alternative folk group, Elbury. Born in a brick-and-concrete pillbox on the side of Red Hill, as an acoustic folk duo. Awkward tunes in minor keys; awkward lyrics, obscure themes - the standard output of any new band trying to mark out a piece of original territory. Through the churn of the no-profile original music scene, Elbury persisted - knowing that a band can find their own sound and move forward on their own terms

With the introduction of bass, drums and synth in recent years, the band have shifted from traditional acoustic folk to darker alt-folk-rock sounds, including progressive, ambient elements. The music, at heart, remains the same: honest observations and multiple musical elements jostled into occasional cooperation. The band defy categorisation, shifting between mellow jazz interludes, rollicking folk-rock and intricate baroque passages. Winsome melodies, with three-part harmonies and a close weave of organic and digital textures wrapped around. Without the power and bombast of harder styles of music, the beauty of the phrase and the arrangement becomes make-or-break.


Past Life Memories, layers rich three-part harmonies over ambient guitars, building to a rolling folk-rock chorus. The song imagines a chance encounter with an old school-friend. "Hey, how are you these days?". The questions that inevitably arise, and the possibility of ducking down a laneway to avoid the situation altogether.