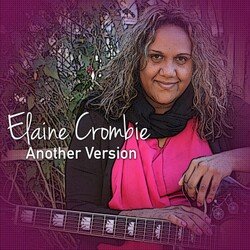 Elaine Crombie has a proven career stretching across the arts, as an actress in film, television, theatre and dance and is spreading her creative wings more seriously into the music world.
She releases her first studio work, Another Version, with five original compositions reflecting some of her life experiences but mostly celebrating life and love.
While she has taken on the roles of many throughout her career, Another Version represents a stripped back Elaine Crombie being herself, revealing herself.
From the up-beat Hey Hey Little Sister to the more melancholy tribute to those suffering at the hands of others in The Wind, her full, rich voice is compelling and easy listening.
Next year, ABC Television will release of the new series 8MMM (Princess Films) where Elaine plays receptionist Milly. This series will showcase two of Elaine’s original songs from Another Version.
A former student of the Centre for Aboriginal Studies in Music at Adelaide Uni. Elaine is also an ACPA alumni, backing up her natural talent with accredited skills.
Elaine identifies as a strong, proud Aboriginal, South Sea Islander woman with German heritage. She was born in Camperdown, Sydney; raised in Port Pirie, South Australia and now lives in Wollongong.


The Wind was born from the horrendous story of a teenager bashed and buried alive after interrupting a robbery. It laments the life this young woman and so many like her around the world. An intensely emotional song, it also touches on many themes expressed by survivors of violence.

Other tracks by Elaine Crombie: Will You Wait For Me  -  Oh Brother
%