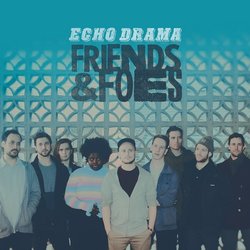 Echo Drama are a 9-piece Reggae, Dub, Hip Hop Melbourne band fronted by the dynamic vocal duo of Zimbabwean born Soul singer 'Thando' and gifted rapper 'Sinks' (Recipient of 2017 Hilltop Hoods Initiative). Echo Drama have a sound steeped in the traditions of Reggae and Dub but are not afraid to draw on elements of Rock, Dubstep, Dancehall, Latin, Jazz, Funk and Soul. A staple in the Australian venue and festival circuit, Echo Drama have performed around 150 shows across VIC, NSW, ACT, NSW, QLD and SA, refining an explosive live experience. Following the release of debut EP “Bury The Weapons” in 2014, the long awaited release of debut LP “Before It All Ends” is impending, with several singles from the upcoming record being released throughout 2018.

“A downright dreamy combination of traditional reggae and contemporary hip-hop and RnB will have you hooked within mere moments of your first listening. ” - AU Review

“While respectfully doffing their various bits of headgear to those who came before them, Dub/Reggae juggernaut Echo Drama have prioritised good music over pigeon holes in a band where the musical influences are almost as diverse as its audience appeal” - Beat Magazine


Inspired by 90's R&B and Latin Hip Hop, the track branches away from the band's Reggae roots whilst still fusing distinctly Echo Drama elements such as huge brass and heavy rhythm section layers.
Zimbabwean born Aussie soul queen Thando and prolific MC Sinks deliver intertwining vocals on the the themes of friendship and loyalty over the band's airtight genre-crossing sound.