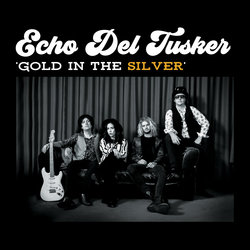 In the band’s first year on the scene, Echo Del Tusker have already played dates with Rose Tattoo and Dallas Crane, toured VIC-NSW-WA, been featured on Triple M, partnered with Scenestr Mag for a pair of single releases, received international radio play including the US and UK and been featured in Classic Rock Magazine, The Music AU, Amnplify, the Rockpit and on The Hard Rock Show to name just a few.


After receiving glowing reviews for their debut EP “Words To Live By,” Echo Del Tusker return with a brand new single Gold In The Silver on 26th July. The track was recorded at Lighthill Sound Recording in Melbourne with producer Ricki Rae, and the band will once again partner with Scenestr Mag to exclusively premiere the single and video.