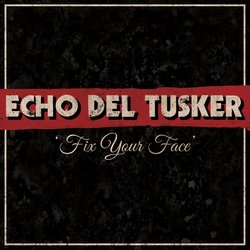 Estelle Artois (lead vocals/guitar) was a founding member of the female power-trio Tequila Mockingbyrd, Brendan Forward (guitar) recorded and toured with Massive and Mick Quee (bass) spent time with Dead City Ruins, Cicadastone and Perth’s Hailmary - three rock ‘n’ roll lifers who found themselves musically single and unattached at the same time. “We all came together after having left our old bands, and none of us were done,” says Artois. “We really missed all those things that make you a working musician playing in a band.”

When Artois, Forward and Quee’s style and sound are blended together along with hard-hitting drummer Josh Potter, you get Echo Del Tusker: music that contains fragments of rock, blues, garage and a dash of R&B – or as guitarist Forward has labelled it: “guitar-driven soul rock.”

Echo Del Tusker’s Fix Your Face will be released on November 2nd and will be available at all major digital music outlets via GYROstream (AU).


After receiving glowing reviews in Australia and beyond for their debut single 'Can’t Keep Your Man,' Echo Del Tusker return with 'Fix Your Face' – a track The Rockpit called “another fine card from (Echo Del Tusker’s) winning hand… a huge song!”

Fix Your Face will be released on November 2nd and is available at all major digital music outlets.