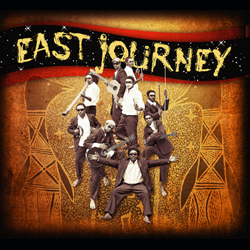 East Journey are a young Aboriginal band from N.E. Arnhem Land. Fusing contemporary and traditional music, they share their language, culture and country through music, song and dance.

East Journey is a blend of contemporary rock, reggae and ballads highlighted with traditional bilma (clapsticks) and yidaki (didgeridoo). They tell ancestralstories in a uniquely different contemporary style that has the ability to engage their audience, no matter whether they are from the city, bush or sea.

Forming some years ago under the direction of front man Rrawun Maymuru, and reforming in 2010 with some new additions, East Journey reflect the manikay (songs) of North East Arnhem Land.

East Journey released their album ‘Guwak’ in April 2012 and have earned a performance slot at the National Indigenous Music Awards in August 2012.


Fusing electric guitar and didgeridoo, 'Song of Arnhem Land' features a catchy chorus, lyrically it talks about the apprehension the band feels when they travel to new places, new countries and new cultures.
While tours and music pulls them away, their family, culture and country pushes them to come home.