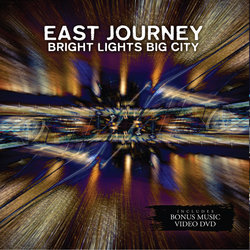 New single Bright Lights Big City is a result of this experience. It’s about how we live in a fast moving, shrinking global village. How we forget to live in the moment & reflect that life is for now; how we can remain centered & strong & think what is really important to us amidst all the chaos & technology that compels us to ride on time.

Original members of Yothu Yindi Ben Hakalitz, Buruka Tau & Stu Kellaway recorded with, and mentored the band on this occasion.


Bright Lights Big City heralds in a new cycle for East Journey. A guitar driven song accompanied with yidaki beats that travel along a solid groove in the bass and drum lines. Features original members of Yothu Yindi
And released with a stunning film clip.