Eagle And The Worm - All I Know 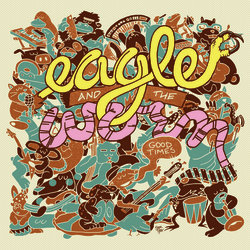 Good Times is the debut album from Melbourne’s Eagle and the Worm, quite possibly the country’s bestest party band, who could not have named their album more appropriately.

The eight piece collective centre around charismatic front man Jarrad Brown, singer/songwriter and multi-instrumentalist who has brought together a phenomenal line up of local musicians for what comes across as a classic debut album.

The album was cut across 4 days in one room in North Fitzroy with Steven Schram (Little Red, Cat Empire, Little Birdy) at the helm of the mixing desk and with Jarrad working as the creative director.

EATW are all about the live experience. Sonically Good Times moves without hindrance between different concepts and sounds, as expected with most bedroom records. The obvious influence of 60s and 70s pop music stands tall - echoes of Bowie, E Street band and Beach Boys, gracefully done in a contemporary light - the production steers well clear of any retro tags. Jarrad’s ability to draw together so many iconic sounds into songs that work as contemporary pop music stands out as one of the most impressive aspects of this glorious, unpretentious album of songs and sounds.


“All I Know" were the first taste of Eagle Beat in 2010, and the rightful tag of “Party Band” ensued

Other tracks by Eagle And The Worm: Too Young  -  Good Times
%